1. Tom's mom had three children. The first was named May, the second was
June. What was the third childs name?

2. The manufacturer doesn't want to use it, the buyer doesn't need to use it
and the user doesn't know he's using it. What is it?

3. The word CANDY can be spelled using just 2 letters. Can you figure out
how?

4. Bill bets Craig $100 that he can predict the score of the hockey game
before it starts. Craig agrees, but loses the bet. Why did Craig lose the
bet?

6. FOUR is HALF of FIVE.
Is this statement True or False?

7. A woman shoots her husband.
Then she holds him under water for over 5 minutes.
Finally, she hangs him.
But 5 minutes later they both go out together and enjoy a wonderful dinner
together.
How can this be?

8. What do these 3 have in common?
Superman
Moses
The Cabbage Patch Kids

9. What is black when you buy it, red when you use it, and gray when you
throw it away?

11. I can sizzle like bacon,
I am made with an egg,
I have plenty of backbone, but lack a good leg,
I peel layers like onions, but still remain whole,
I can be long, like a flagpole, yet fit in a hole,
What am I?

12. This is an unusual paragraph. I'm curious how quickly you can find out
what is so unusual about it? It looks so plain you would think nothing was
wrong with it! In fact, nothing is wrong with it! It is unusual though.
Study it, and think about it, but you still may not find anything odd. But
if you work at it a bit, you might find out! Try to do so without any
coaching!

13. Hi! Ma and Pa told me I'd better say that all the two-letter words in
this paragraph have something in common ...... or else! What's the common
factor here?

15. This one's a tuffy! There is a common English word that is seven letters
long. Each time you remove a letter from it, it still remains a common
English word - from seven letters right on down to a single letter. What is
the original word, and what are the words that it becomes after removing a
letter at a time?

16. In olden days you are a clever thief charged with treason against the
king and sentenced to death. But the king decides to be a little lenient and
lets you choose your own way to die. What way should you choose? Remember,
you're clever!

17. What is it that when you take away the whole, you still have some left
over?

18. What six letter word in the English language contains ten other words
without rearranging any of its letters?

19. Name an English word of more than 2 letters that both begins and ends
with the letters "he" in that order. There are two possible answers. "hehe"
is not acceptable.

20. A man was found murdered on Sunday morning. His wife immediately called
the police. The police questioned the wife and staff and got these alibis:
The Wife said she was sleeping.
The Cook was cooking breakfast.
The Gardener was picking vegetables.
The Maid was getting the mail.
The Butler was cleaning the closet.

The police instantly arrested the murdered. Who did it and how did they
know?

4. Bill said the score would be 0-0 and he was right. Before any hockey game
starts, the score is always 0-0.

5. "e n t " They represent the first letter when writing the numbers one
thru ten.

7. The woman was a photographer. She shot a picture of her husband,
developed it, and hung it up to dry.

8. They were all adopted!

9. The answer is Charcoal. In Homer Simpson's words: Hmmmm... Barbecue.

10. Sure you can: Yesterday, Today, and Tomorrow!

12. The letter "e", which is the most common letter in the English language,
does not appear once in the long paragraph.

20. It was the Maid. She said she was getting the mail. There is no mail on Sunday!
Posted by Krish at 4:45 AM No comments:

Here you have a great chance to know about yourself like your character etc. without spending any money. This test was devised by oxford university. It tells about your personality just by your choice. So know yourself & enjoy

Imagine you walked into a small hut by the river in the jungle. You pushed open the door, in front of you were 7 small beds to the right of the hut,and another 7 small chairs surrounding a small round table. In the middle of the table was a round food tray with 5 kinds of fruit in it.
There are:
a. Apple
b. Banana
c. Strawberry
d. Peach
e.

Which fruit will u choose?
Your choice reveals about u! Pls be very Honest to yourself.....
& Now scroll down for results:

What begins with T, ends with T, and has T in it?
Ans.:Teapot

A word I know, six letters it contains. Subtract just one, and twelve is what remains.
Ans.:Dozens

Tom's mom had four kids: Nickel, Dime, Quarter and what is the fourth?
Ans.:Tom

What is a five letter word which becomes shorter with two letters added onto it?
Ans.:Short

The more you take, the more you leave behind. What are they?
Ans.:Time

What English word starting with 'B' has three consecutive double letters?
Ans.:Bookkeeping

What object has keys that open no locks, space but no room, and you can enter but not go in?
Ans.:Keyboard

There is a plane traveling from New Delhi to Pakistan at 800 KMPH, but unfortunately just as it reaches the border between India and Pakistan, it crashes. Where do they bury the survivors, in India, or in Pakistan?
Ans.:survivors don't get buried, dead people do!!

Standing in an open pasture are a Papa bull and a Baby bull, which member of the family is missing?
Ans.:The correct answer is the cow, there is no such animal as a Mama bull, it's called a cow.

How many members of each type of animal did Moses take on the ark?
Ans.:Moses didn't bring any animals onto the ark, it was Noah.
Posted by Krish at 6:11 AM 1 comment:

1. At the movies: When you meet acquaintances/friends...
Stupid Question:- Hey, what are you doing here?
(Don't u know, I sell tickets in black over here..)

2. In the bus: A heavy lady wearing pointed high-heeled shoes
steps on your feet...
Stupid Question:- Sorry, did that hurt?
(No, not at all, I'm on local anesthesia.....why don't you try again.)

3. At a funeral: One of the teary-eyed people ask...
Stupid Question:- Why, why him, of all people.
(Why? Would it rather have been you?)

4. At a restaurant: When you ask the waiter
Stupid Question:- Is ! the "Butter Paneer Masala" dish good??
(No, its terrible and made of adulterated cement. We occassionaly also spit in it.)

5. At a family get-together: When some distant aunt meets you after years...
Stupid Question:- Munna, Chickoo, you've become so big.
(Well you haven't particularly shrunk yourself.)

6. When a friend announces her wedding, and you ask...
Stupid Question:- Is the guy you're marrying good?
(No,he's a miserable wife-beating , insensitive lout...it's just the money.)

7. When you get woken up at midnight by a phone call...
Stupid Question:- Sorry. were you sleeping?
(No. I was doing research on whether the Zulu tribes in Africa
marry or not. You thought I was sleeping....you dumb witted moron.)

8. When you see a friend/colleague with evidently shorter hair...
Stupid Question:- Hey have you had a haircut?
(No, its autumn and I'm shedding......)

9. At the dentist when he's sticking pointed objects in your mouth...
Stupid Question:- Tell me if it hurts?
(No it wont. It will just bleed.) 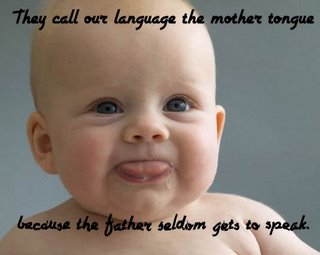 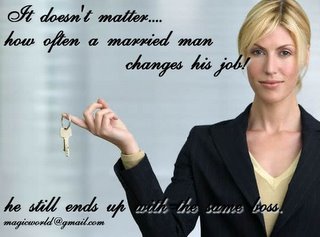 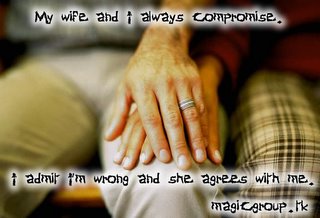 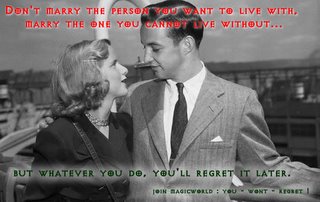 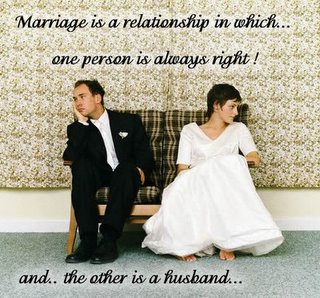 I don't have any idea about marriages... I got this in a forward :)
Posted by Krish at 5:36 AM No comments:

Be happy if u don't have Girl Friend

2. You don't have to spend money on her.

3. You won't get boring result in ur papers.

4. Having a girlfriend is hot, not having a
girlfriend is automatically cool, and every one to be a cool guy loves .

5. This can be more to life than just waiting for the bloody phone to ring

5. You won't have to tolerate someone else defining, "right" and "wrong" for u.

6. Girlfriend can get so possessive that you can't do anything according ur wishes anymore.

7. You can buy gifts for mom, dad, sis or grandpa instead of a girlfriend and have a happier family life.

8. You won't have to waste paper writing love letters.No more endless waiting for ur date to
arrive at some weird shop\place

9. You can have more friends, as u will have more time for them

10. You wont have to tell lie to anybody and, therefore, u'll sin less.

11. You can have good night's sleep-no need to dream about her.

12.You wont have to fight over having a 'special' freind with ur folks.

14. You wont have drown in the pool of her tears.

17. You wont have to hide your telephone bills...

So Try to AVOID Girl Friends in your Life...!